Meet some members of our family 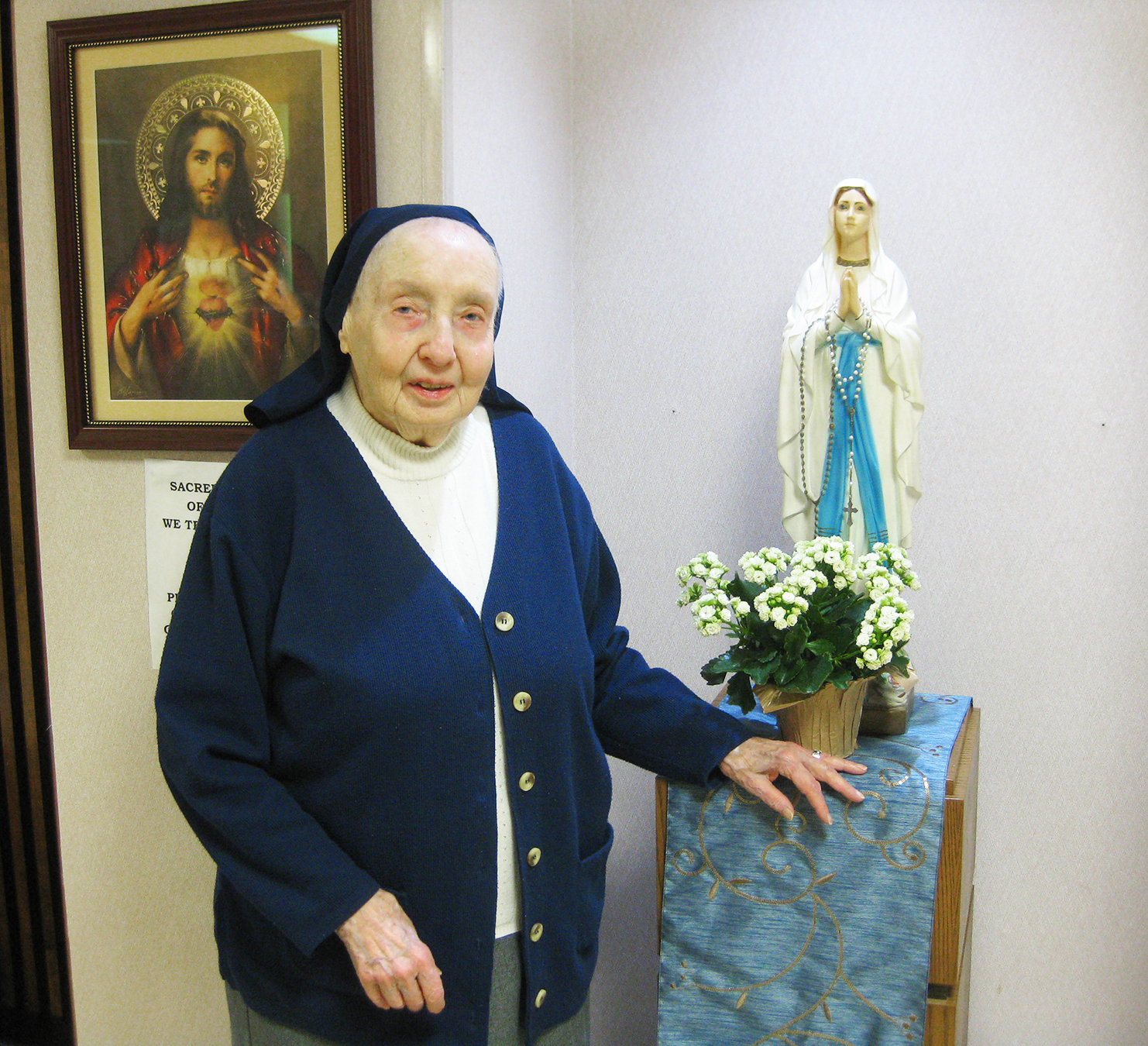 In June of 2021, the Sister of Charity Villa where I had been living, closed so I had to find a new place to live. I was blessed to become a Resident of St. Joseph's Home.

Born and raised in a good Catholic family in Jersey City, New Jersey, I entered the Sisters of Charity at the young age of 17, and I have now been a member of the Congregation for 73 years. My ministry was in various kinds of education. I taught 6th Grade, 8th Grade, high school English, Latin and Religion. I also worked in administration as Supervisor of Schools and as parish Director of Religious Education here in Totowa, at St. James of the Marches Parish.

My first connection with the Little Sisters of the Poor was in 1985 when my mother became a Resident of St. Joseph's Home. I was happy to be a volunteer for many years, driving the Sisters to church collections and serving in the skilled nursing unit's dining room.

As Director of Religious Education at St. James, I worked with the Confirmation classes, helping them fulfill their requirement of community service hours. In conjunction with the Activity Department, our students helped out at bingo, bowling, large group evening events, crafts and setting up the Christmas Sale. The Activity staff were always kind and helpful to the girls and boys. I also know that the staff was grateful to have the youth volunteers helping out and the Residents loved interacting with the them as well. Many students became friendly with the Residents and they learned much from their older friends. It was a wonderful experience for all.

I celebrated my 90th birthday on March 26, and I thank God over and over again for the wonderful spiritual advantages and joyful peace of my life here. It is such a privilege to have daily Mass and Rosary in the chapel with the Little Sisters and the Residents. I am also grateful for the Sunday Holy Hour and the daily Divine Mercy Chaplet.

St. Joseph's Home for the Elderly is truly a blessed place! 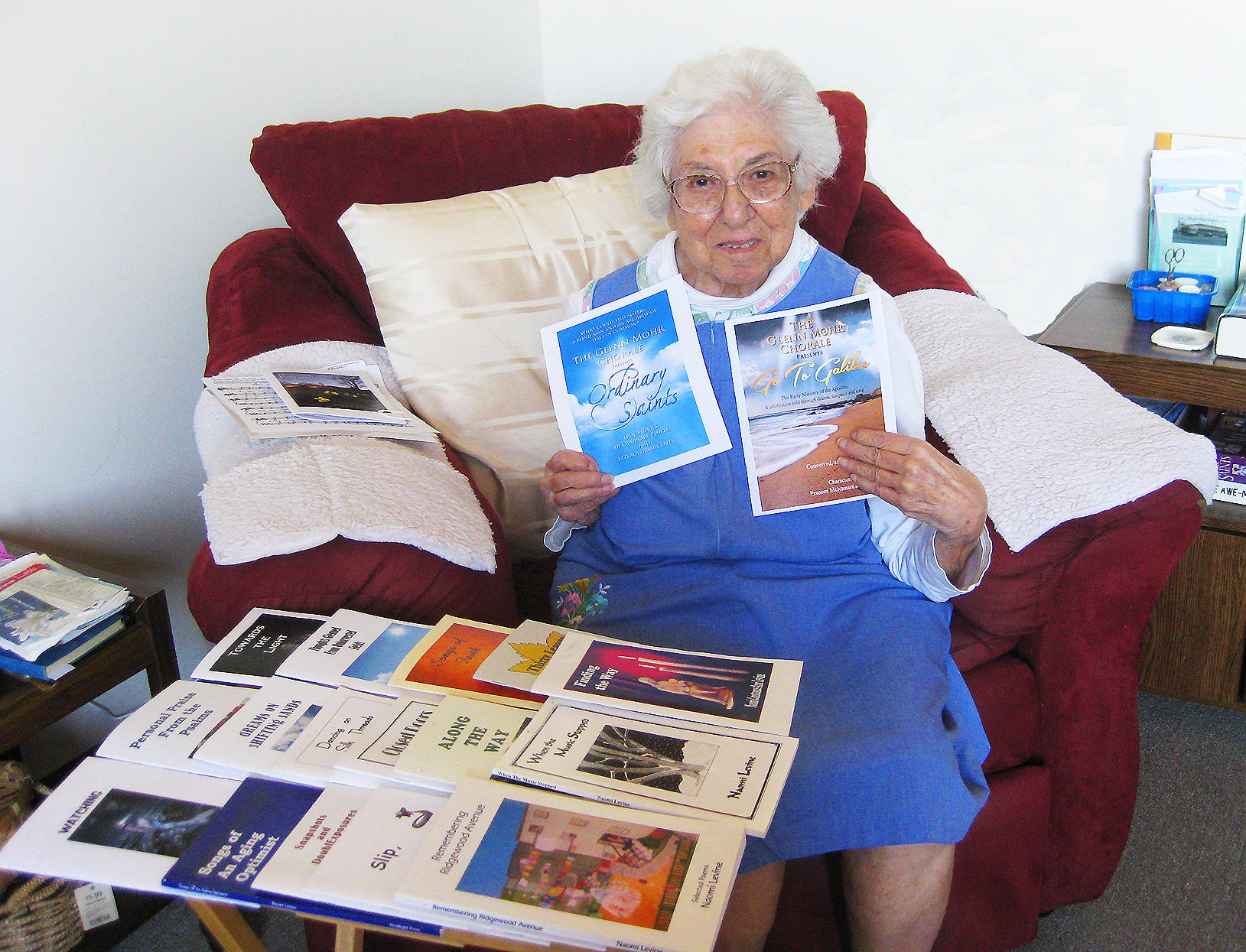 A Woman of Words

Our normal understanding of a poet is a person who writes poetry. But our poet, Naomi Levine, is a person who creates poetry. The inspiration to create poems began early for Naomi. When she was 15, she began writing poetry in a journal and has never stopped.

Naomi was born in Newark, New Jersey and was raised in the Jewish faith. She aspired to be a teacher and after studying a year in France, she went on to teach French and English in New York and New Jersey. In 1972, while living in New York, she was handed a flier about the Gospel of St. John. When she read it that night, “A light went off in my brain that Jesus was the Messiah.” Over the next 20 years, Naomi educated herself about the Christian faith. After retiring in 1993, Naomi converted to Catholicism.

Naomi's new religion inspired her to compose religious poetry in addition to the many poems which had already filled up her journals. When Naomi was 79 years old, a thought occurred to her, “Wait a minute, I’m going to be 80, I better hurry up and publish!” And publish she did! To date, she has written 15 chap books of poems. One of her favorites is a collection of poems about growing up in Newark in the 1930's. Seven books are religious poems reflecting on her faith and devotion to God.

Naomi's poetry made a great impression with the chorale director and composer, Glenn Mohr. After a performance at St. Joseph's Home, Naomi gave him her book, Daffodil Cottage, Poems of Faith. Mr. Mohr was so impressed that he set one to music for his productions of Ordinary Saints, and Go To Galilee, titled "In This Life."

Naomi still can't wait until she is able to return to telling jokes, giving poetry readings and hosting a bible study with the Residents on the skilled units.

And at 93, Naomi continues to write beautiful, inspiring poetry.

"IN THIS LIFE"
I am on a road, It's end I cannot see
I am on a road, Wide open endlessly
I am on a road, Deserted without trees
Buffeted by unseen winds,
I fall down to my knees
Lord, God. Heavenly King,
Master of my soul ever be
Bring me safely thru this life,
To rest in you eternally
Courageously I walk,
For now I hear and see
An Inner voice, an inner light,
My Lord you are in me
- Naomi Levine 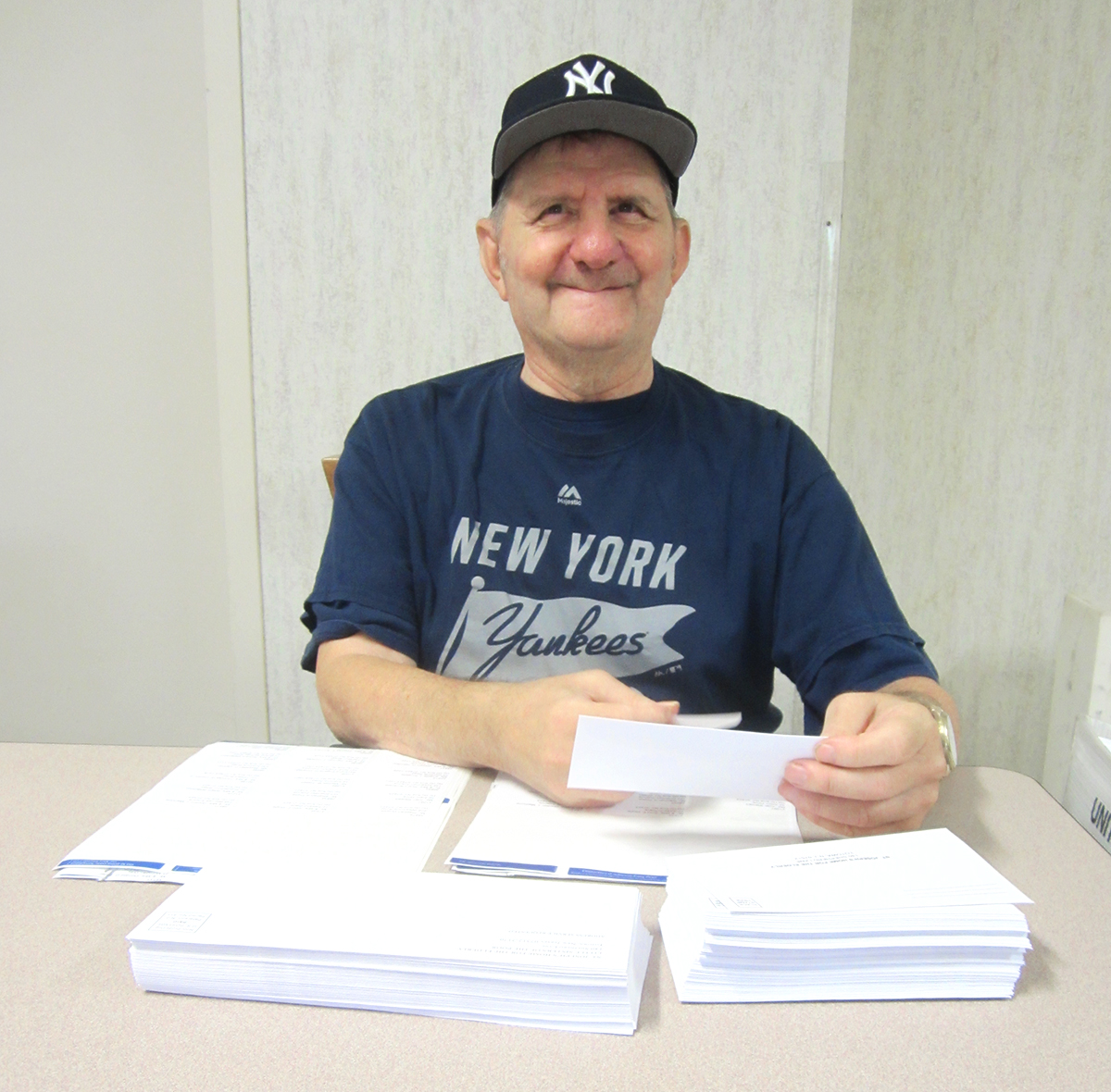 Seventy-one years ago, Carl Guida came into the world in the middle of a January blizzard. God blessed him with an amazing memory, loads of patience and a spirit to work hard and to help others. After he finished high school, Carl’s mother got him a job working in St. Joseph’s Hospital in Paterson, transporting patients to and from the operating room. In 2014, after 47 years, Carl decided to retire. He explained that, “Because they always need help in the hospital and I still wanted to keep busy, I signed up to be a hospital volunteer.” So twice a week, Carl is back at St. Joseph’s Hospital, still helping to transport patients.

When Carl came to St. Joseph’s Home in 2016, he was eager to volunteer his services around the house. He is part of our bulk mailing crew and he also picks up packages at the front desk which he then delivers right to the Resident’s doors. Carl is happiest keeping busy and helping his fellow Residents. He said, “I see someone who needs help and I want to do what I can. It feels good doing something for my friends here.” Carl truly represents the family spirit that can be found in our Home and we are blessed to have him! 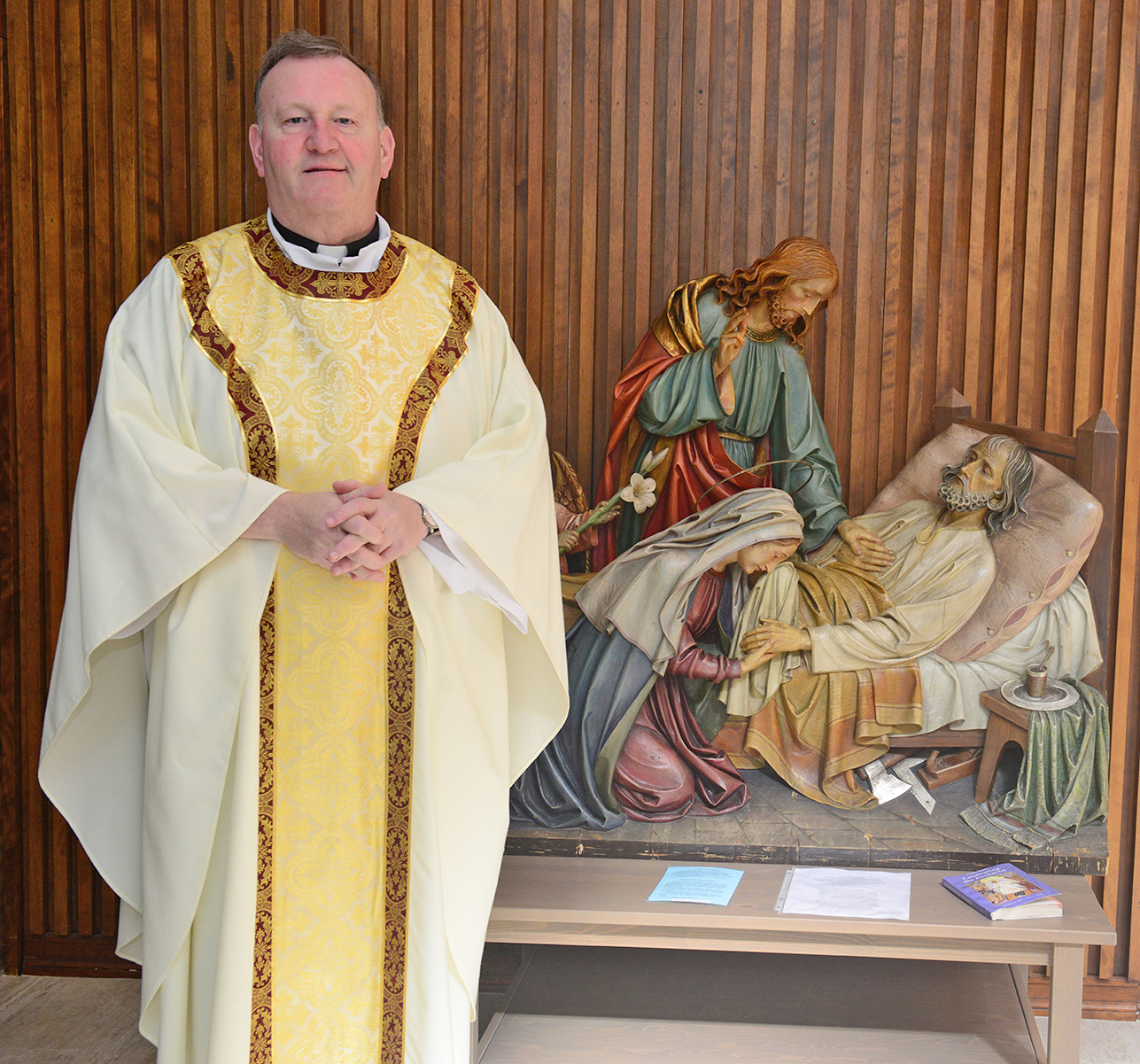 Cead Mile Failte to Fr. Sean Mc Donnell. Father Sean has been with us since September 2018 as our Chaplin. Father comes from a small village in Co. Mayo, Ireland. His parents are deceased, he has 3 sisters, Kathleen, Bridie and Peggy and 2 brothers, Martin and Paddy along with 33 nieces and nephews, 72 Grand nieces and nephews and 15 great Grand Nieces and Nephews.

Father was ordained on June 12, 1988 and has served as Priest in Ireland for 7 years and here in the Paterson Diocese for almost 24 years. He has many talents which he shares with all the Sisters, Residents and staff of St. Joseph’s Home. He brings a breath of fresh air to all who have come to know and love him. Father Sean is very happy here with us as our Chaplin and regards it as a great honor to serve the Lord and the people of St. Joseph’s Home for the Elderly here in Totowa. We are blessed to have Father as part of our family here in Totowa. 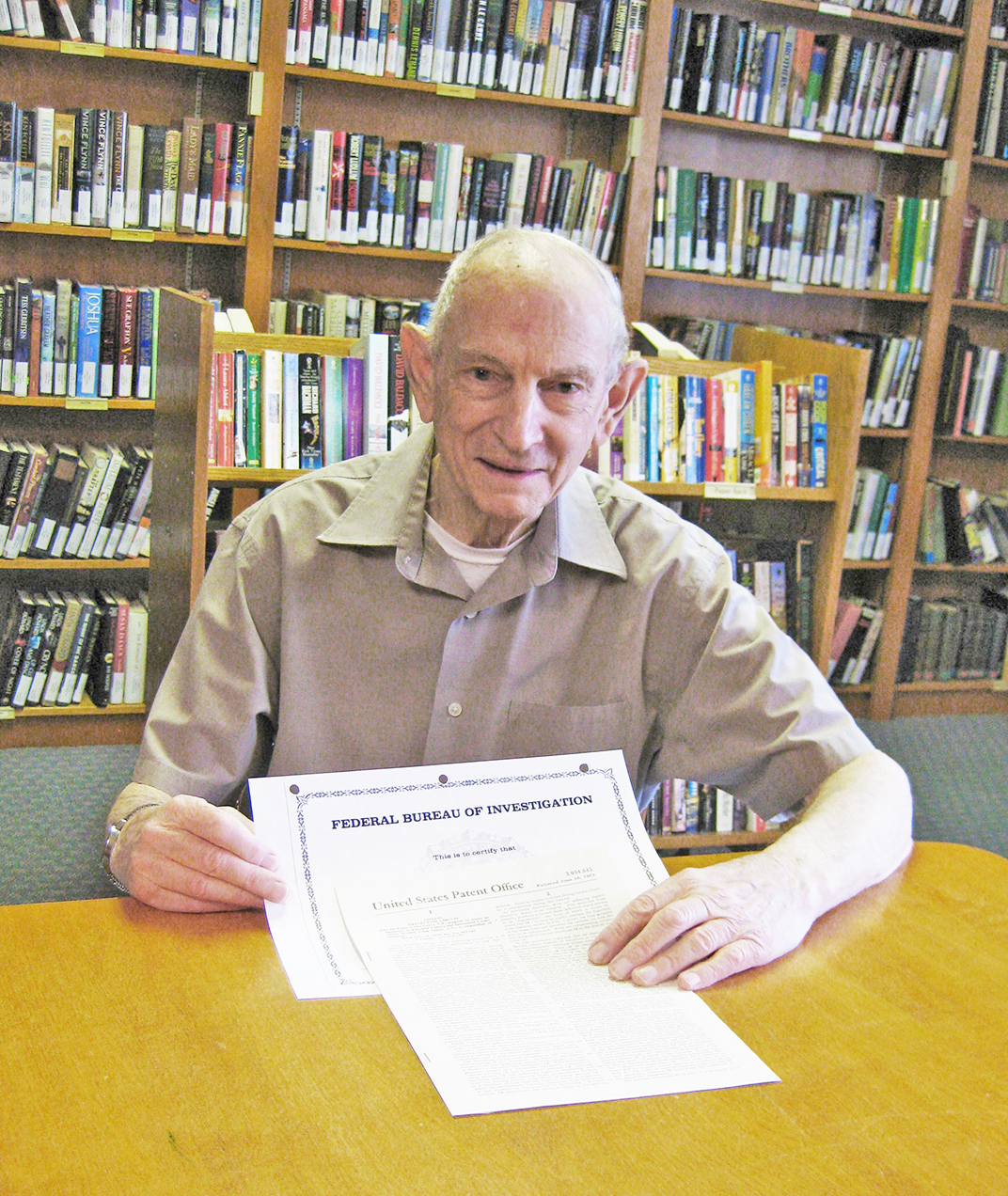 Resident John Di Paolo is a man of many talents. In his 84 years, he has gone from writing classical music to designing computer hardware for NASA. And he can design and build pipe organs too! After high school, his musical talents got him into the Juilliard School. While at Juilliard, John’s hobby of tinkering and design, along with his interest in airplanes, led him to make a big career change, from music to engineering. John worked for several companies but it was when he landed a job at Kearfott, that his career really took off, right into space. When NASA began the Space Shuttle program, Kearfott was awarded contracts to make parts for the shuttle. John is most proud of his designs for the components that allowed the shuttle’s computers to communicate with one another. Throughout his career, John never lost his passion for music, continuing to compose both spiritual and classical pieces.” Nowadays, John does all of his composing on the computer. “I use the sounds played on real instruments,” he said. John will continue playing his music for everyone at St. Joseph’s to enjoy. John is pictured here with one of his patents and a certificate from the FBI. 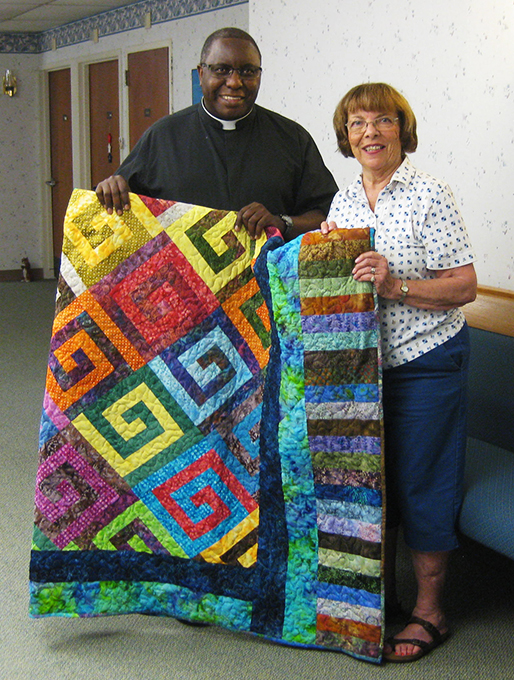 To say that Resident Dolores Nichols loves to quilt would be an understatement. There is never a time when she is not working on one quilt and planning the next. Dee spoke of what sparked her interest in quilting, “My son said quilts had a lot of character and that he loved them. So to make him one, I began to research everything about quilting. I found out that a friend of mine gave quilting classes so I signed up.” That was 27 years and many quilts ago. Dee is a member of The Clifton Quilters club where she picks up new patterns and new ideas. Recently Dee made a quilt with a “Greek key” design and gave it as a surprise gift to our Chaplain, Father Fulgens Katende. Father was so happy to receive this beautiful handmade quilt, made in the bright colors seen in his native Uganda. One of Dee’s more intricate creations can be found hanging in the coffee shop. Dee wants everyone to know that everything she makes is “stitched with love!” 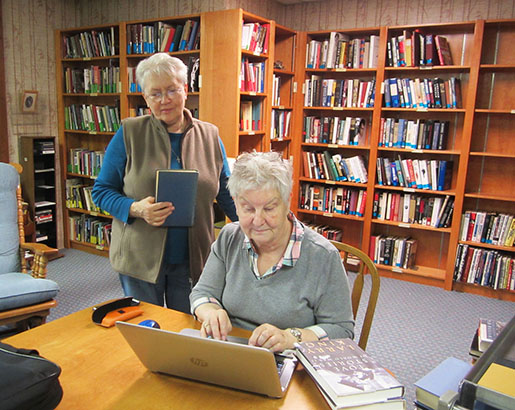 Our Residents enjoy keeping themselves busy. Barbara Mahler is a retired bookkeeper and sought meaningful work and to be of service. So she took on the task of organizing and recording the entire contents of our library. Using her computer skills, she created a searchable database and print catalog making it easy for everyone to find books, cds and movies. Milada Solej, a keen organizer herself, offered to help and thus a great team was formed. Now they both are bookkeepers of a different sort! 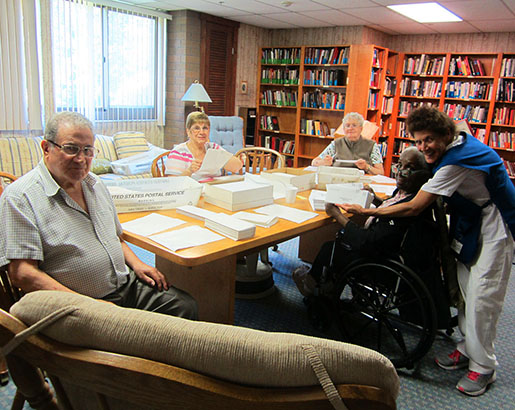 In an effort to raise funds for our Home, mailings are sent out soliciting donations and announcing fund raising events. We have a team of Residents who label and stuff the envelopes for each mailing, usually in the many thousands of pieces. During the busiest times, Volunteers come in as well.

Pictured from left to right are Residents John Armagno, Cathy Payne, Milada Solej, Faye Kennedy and Lizzie from housekeeping who stopped in to say hi.